Another Covid-19 Concern: Vaccines Can Have Potential Side Effects

Covid-19 vaccines are likely to make their recipients feel a little lousy and lethargic for a couple of days, according to reports. Repeat the vaccination routine after 3 to 4 weeks.

The vaccines, as we know, require 2 doses to give strong protection. Shots are to be given few weeks apart, according to respective brands. Scientists are anticipating that these shots would cause weakening flu-like symptoms, or side effects, such as fever, muscle aches, and sore arms, which could last three to four days, or a week. Even if the vaccines are 90% effective, according to Pfizer reports, 1 out of every 10 recipients remains vulnerable. It indicates that in times to come, even as immunity of population-level grows, people should not let their guards down. Do not stop wearing masks or maintaining social distance.

Saad Omer, Director, Yale Institute for Global Health, said, there has been a constant push for developing vaccines at an unprecedented speed. As a result, large-scale planning to communicate the possible side effects of the same should be considered as well. 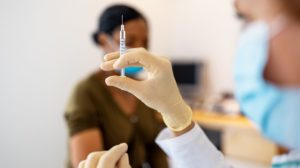 He was quoted saying, “We must communicate, and communicate this effectively, and start planning right now.”

As some experts consider Saad Omer to be a President-elect candidate of Joe Biden’s team of healthcare, Kaiser also quotes him suggesting public health specialists position about negative side effects of the first injection as something good.

Omer says, “There is adequate evidence that suggests if someone frames pain simply as a substitution of the effectiveness of the jab, it is helpful. If it hurts a little, know that it is working.”

Other specialists are bracing for likely patient noncompliance.

William Schaffer, MD, Vanderbilt, was quoted saying, “We are requesting people to get vaccinated because it will hurt. There would be frequent bouts of arm soreness and a large number of people may also feel crummy for several days.”

Considering human nature, motivating people to get back for their second dose of utter discomfort is hard to sell, warns Schaffer.

The third expert in this field, Paul Offit, MD, University of Pennsylvania, and a vaccinologist also suggests that preparatory patients should be allowed to take communications to their cue after the full reports of the vaccine trial.

Pfizer is allegedly inching closer, after all, as well as other eminent pharma companies.

Offit was telling Kaiser, “Looking at the data, it is possible to accurately define the groups of recipients most likely developing side effects, the efficacy of vaccines, the time-frame of lasting efficacy, safety data tested so far, and more such concerns. I believe it is time to communicate everything. Be prepared.”

sepStream® is the most trusted and reliable name in the field of healthcare imaging solutions. Using state-of-the-art infrastructure, advanced software, and the latest AI techniques, skilled professionals deliver quick and accurate results in no time.