The practical limits on consumer-grade computer memory have prevented a large number of application types from entering homes or businesses until the 64-bit barrier was broken. Once it became possible for relatively inexpensive computers to address virtually unlimited amounts of memory, data sets which were too cumbersome for less advanced computers became usable, and new kinds of applications from machine learning to the beginnings of artificial intelligence heralded yet another change in how technology affects industry and society.

One of the most interesting and fast-moving industries employing artificial intelligence is healthcare. The combination of advanced medical devices, the ability to store arbitrarily large amounts of data and the processing power to analyze and interpret that data has given rise to a world where computers have become highly capable general purpose medical devices that can be used in a variety of ways.

>>The Theory of AI

Academically speaking, the term “artificial intelligence” is far more a theory than a software classification at this point. What is most often referred to as “AI” is more likely an expression of “machine learning,” where a computer is trained to recognize various patterns in data sets and secondarily trained to collect and organize the data to analyze. 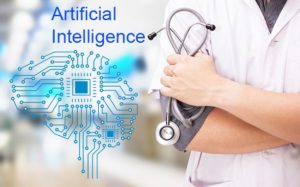 Theoretical artificial intelligence is hard to define. Academic definitions of just what constitutes “intelligence” leaves open the question of how someone can know definitively whether a computer is intelligent or, more importantly, how a computer can become intelligent. Pattern matching, on the other hand, is easily tested, because it can be modeled mathematically. Microprocessors, after all, can only process data based on mathematical calculations.

Some academics believe we will know when the first computer becomes intelligent because it will begin asking questions instead of just answering them.

Pattern matching is something computers can do because they are able to work through large data sets very quickly. Human beings recognize patterns through non-linear processes. Facial recognition, for example, is something a human brain is uniquely equipped to do. Teaching a computer to use images and measure distances, contours, colors, shapes and sizes of various facial features is enormously complex.

In the medical industry, pattern matching has huge implications and numerous practical applications. Screening for potentially dangerous drug interactions, for example, is something a fast system with large data sets to analyze can do very well. Examining X-rays and magnetic resonance images for various visual patterns is also something a computer is well equipped to do, especially if it is programmed to receive positive reinforcement when it successfully detects whatever it seeks.

Developers who insist that computers can replace medical professionals often overlook the human factor when it comes to interpreting information. Humans have intuition and a very different approach to pattern matching and intelligence than computers. A human mind doesn’t have to go through an entire data set in a linear fashion. A human being can discount huge portions of a potential information space at a glance, because there are certain things a doctor or nurse, for example, knows are impossible. What computers do well and what humans do well are complimentary, which means the true information processing power of human plus computer will always exceed that of computer alone.

The healthcare industry will be one of the first to develop what they call “AI” into a set of tools that will greatly benefit mankind. While it remains to be seen if attempts are made to build computers into tools for medical diagnosis rather than simple data processing, the fact is certain aspects of machine learning are well suited for certain goals in the health care industry. Being able to correlate treatments, capture results over time, produce data spaces consisting of good and bad image types and so forth will take advantage of the best machine learning and pattern matching have to offer.

In the meantime, doctors, medical device manufacturers and other health care professionals will have an opportunity to evaluate the success and progress of these algorithms and their ongoing results and help improve the application of health care AI in the marketplace until it becomes a valuable tool for every kind of professional from emergency medical technicians to hospital administrators.

What all the stakeholders will need to remember is the only danger in the field of artificial intelligence is when we rely on it to our detriment. Computers, AI, machine learning and pattern matching algorithms are all tools and nothing more. Their success or failure depends entirely on the professionalism, integrity and skill of the doctors and nurses using them, and the ultimate goal of medicine, which is to benefit and care for human beings.