The recent-most case of kickback scheme from South California has been revealed by an efficient team of investigators that exposed the acts of bribery of Gonzalo Paredes, the office manager of advanced radiology and Ronald Grusd, the owner of the radiology center. Their role in the multi-million dollar kickback scheme ended up with a punishment of 5 years imprisonment for Gonzalo and 10 years for Ronald.
The fraud, known as Operation Backlash, billed the insurance companies more than $ 5 million along with a kickback amount of $225000 million. The reports got published from the Office of District Attorney, San Diego Country.

Use Of kickback Schemes By Healthcare Industry

No industry remains out of the reaches of malpractices. No matter how critical or important the services related to any industry are, some people always engage in unfair practices making to the entire system suffer. The healthcare sector is also not an exception in this regard.

Moreover, it has to be kept in mind that healthcare has immense potential to accommodate several avenues leading to unethical practices owing to its very nature. The entire health care industry runs on the strong bond of trust between doctors and patients. If anyhow, this trust can be manipulated, easy ways of earning black money come out.

Kickback schemes are an example of such unethical practices in the healthcare sector that enable an intermediary to earn cash by offering service to one party and manipulating the other. In simple and explicit words, the commission earners link up the doctors with patients to earn their share of money out of business generated by the doctor.

It is one of the most unethical and destructive practices for the healthcare industry that encourages unconditional relations between the patients and the doctors. Ideally, neither the doctors nor the patients should be paying anything extra to someone else in order to get treatment or patients.

However, unfortunately, the market has people who engage in this unfair practice and malign the overall operation of the sector. More often than not, the pharmaceutical companies and the health care institutions project these acts of bribery as a lawful act and adjust the payments received accordingly within their accounts balances.

Surely this contaminates the overall idea of the healthcare industry and puts the faith of people in this sector at the brink. Offering money for induced business becomes a general idea under the long term prevalence of such practices. It adversely impacts the quality of service extended to the patients as well as the doctor-patient relationships in the long run.

The motto of healthcare shifts from the health of the patients to the wealth of the doctors when kickback schemes become operative. Hence, the healthcare industry gets immense impacted under these circumstances jeopardizing the future of the healthcare sector. It is a wide nexus of people who connect with each other to earn money through unscrupulous means, which must be battled strongly. 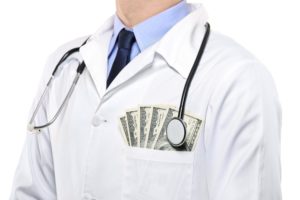 Under the USA medical laws, if anyone is found to be associated with kickback schemes, immediate trial and prosecution is a must. The law provides for several sections dealing with multiple degrees of the crime and their merits.

Depending on the designation of the person in the medical institution found guilty and the commissions charged for carrying out the referral services, the magnitude of the sentence gets decided. Once a suspect gets proved to be guilty, the punishment can be of imprisonment, financial penalty, or a combination of both depending on the depth of the crime. If doctors are found to be involved in such schemes, penalties also apply for them.

No one, associated with such malpractices linked with a service considered to one of the noblest and necessary one, is exempted from the punishment after the crime gets established. The American laws are pretty strict about these and provide legitimate punishment for the crimes.

Also, if a medical practitioner gets caught under kickback charges, his license can get canceled as well, making him incapable of continuing the medical practice anymore. Hence, there always remains a career risk as well besides the financial penalty and the imprisonment part.

Kickbacks are practices for several reasons. Sometimes the intermediaries get the payments from the doctors for fetching patients to them. Also, the doctors snatch a part of the radiology department’s income in exchange for referring his/her patients to the specific radiologist.

Kickback is a mutual process through which both doctors and the pathologists, radiologists, etc. earn additional income by making mutual referrals of the patients. Any act of bribery referring patients to doctors of healthcare service providers can e referred to as a kickback.

sepStream® has various types of technologies imbibed solutions to keep every data related to your medical records safe and secure. If you are looking for a trustworthy company when the terror of data theft is looming large in the market, you can rely on us. We aim at providing the highest degree of client satisfaction and our service aim at meeting your requirements.