The Covid-19 has been one of the fastest spreading viruses in human history. What began as a local infection in a Chinese province, has now taken over the entire world, forcing people to stay indoors and give away their usual way of life. The pace of the spread of this new coronavirus, named as the SARS-CoV-2 virus is indeed startling.

While genetically, it is more than 80% similar to the erstwhile SARS-CoV virus that had spread in the initial years of the 21st Century; the new corona virus’s ability to infect people is much higher. The reasons pointed out for this is the spiky structural design of the virus that makes it easy to bind with the human cells tightly.

Further, the virus is activated by an enzyme- furin that is easily found in the human tissues such as lungs, liver and the like. This knowledge about furin-activation is being used by scientists to explain the various symptoms that Covid-19 infested patients’ exhibit. While the physical symptoms of Covid-19 have more or less been studied and established, researchers are now focused towards the more subtle effects that this virus has in the human body. 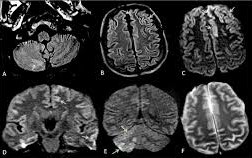 Initially, any connection between Covid-19 and the central nervous system was completely unthought-of. However, a startling new data that has surprised many researchers is that Covid-19 may cause the development of adverse neurological symptoms in the patients. MRI from a test population of Covid-19 patients reveals that there are three distinct patterns in these symptoms which can be clearly identified.

In the June 16 edition of the journal Radiology, the French Society of neurology has published their findings based on the tests that they have conducted on near about 37 patients from their different 16 centres spread across the country.

By publishing this data, it has become the first organization to have studied and established a number of neurological anomalies related to novel Coronavirus as can be seen from the MRIs. However, stroke has been excluded from this list of study.

What The Study Shows?

Most of the neurological symptoms manifested in the patients who were sexagenarians and above. The common symptoms included pathological wakefulness, especially after stopping sedatives (41%) and altered consciousness (73%). Confusion and agitation were also recorded in some of the patients (32% and19% respectively)

Most of the abnormalities that came to light with the help of the MRIs relate to the part of the brain that deals with cognitive, emotional and critical functions. In medical terms, it is also known as the medial temporal lobe. The researchers have recognized this as the first pattern.

The second pattern, which was researched and documented by Stephane Kremer along with colleagues at Hospital de Hautepierre found that a small group of patients (less than 30%) exhibited multifocal white matter hyper intense lesions on FLAIR, which are mostly associated with hemorrhagic lesions.

This symptom, though rarely seen in the Covid-19 patients, is close in resemblance to the kind of disorders and damage to the fatty nerve coverings, which usually happen in the case of chronic disorders.

The third brain MRI pattern was experienced in a very minute number of patients, consisting of less than 24% of the test population. Apart from them, seven other critically ill- patients who were under observation for a different case study also exhibited somewhat similar patterns.

This condition has been named as – extensive and isolated white matter micro hemorrhage. However, the exact pathway that leads to this kind of hemorrhage still remains to be fully comprehended by the study and mew research is underway.

A majority of the patients who exhibited this symptom were suffering from a more severe infection of Covid-19. More than half of the MRIs from this group of patients also had intra-cerebral hemorrhage lesions (54%).

Since the full relation between Covid-19 and the Central Nervous System has not been revealed yet, much scope remains for study in this area. A leading medical journal- Journal of Alzheimer’s Disease suggested that a baseline MRI could be performed, prior to the discharge of the recovered patients.

This could prove to be the starting point for future research. In the same study, a three-stage “Neuro Covid” framework has been suggested that could help in understanding and establishing the brain damage that is caused by the virus.

Imaging and neurological follow-up can reveal much more about the involvement of SARS-CoV virus. Are you looking for an up-to-date and affordable solution in the field of medical imaging? Then sepStream® is the ideal solution for you. With the most advanced technology coupled with our timely delivery and a full-time technical support, when you have us with you, you have complete customer satisfaction guaranteed.