Facebook and NYU Team Up To Make Fast MRIs

People who have undergone an MRI scan often explain their experience to be unsettling. You would be placed inside a claustrophobic tube and you have to lie still for as long as an hour as unseen hardware, creaks, thumps, and whirs around. However, new research suggests that AI could help with the predicament – it could make MRI scans faster by four times, thus giving relief to patients much faster.

NYU Grossman School of Medicine in collaboration with Facebook AI created a unique artificial intelligence (AI) system that can make MRI scans much faster and diagnostically accurate just as images produced through traditional techniques. The project is named fastMRI.

Together, scientists experienced in machine learning model pairing high-resolution and low-resolution MRI scans, use this model as a tool to predict the result of MRI scans from merely one-fourth of the input data. As a result, scans are much faster, meaning lesser hassles and faster diagnoses.

The Verge reported that Nafissa Yakubova, one of the visiting biomedical AI researchers at FAIR (Facebook’s AI Research) who also worked on this project, said, “It’s a major stepping stone to incorporating AI into medical imaging.”

The neural network of artificial intelligence is primarily responsible for such prompt action, which delivers quick scans from fewer data. The neural network follows an abstract idea of the medical scan and predicts the scan after examining training data. Thereafter, it utilizes the same data to predict the outcome. For example, imagine an architect who has designed several banks over many years. It is only obvious that the architect would have a clear abstract idea of the look of a bank. Thus, his work becomes easier and he can deliver a blueprint much faster.

Dan Sodickson, a radiology professor at NYU Langone Health, in his interview with The Verge, says, “The neural network knows about the overall structure of the medical image. In some ways what we’re doing is filling in what is unique about this particular patient’s [scan] based on the data.”

The team of fastMRI is working on the same problem for many years. However, now they are finally publishing a concrete clinical study in the recognized American Journal of Roentgenology. According to the team, it proves that the method is trustworthy. The study further asked radiologists to diagnose patients based on traditional MRI scans as well as AI-enabled scans of knees. The study reveals that in both traditional as well as AI scans, doctors successfully made the same assessments. 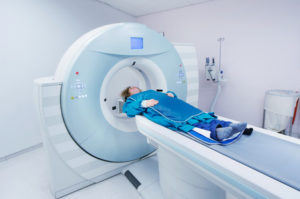 Sodickson says, “The keyword here on which trust can be based is interchangeability. We’re not looking at some quantitative metrics based on image quality. We’re saying that radiologists make the same diagnoses. They find the same problems. They miss nothing.”

This is an extremely important concept. Even though models of machine learning are frequently in use for the creation of high-resolution data even from low-resolution input. This process might lead to errors. For instance, AI is useful to upscale imagery of low-resolution from an old video game, whereas humans should check the output to ensure it is matching the input. Moreover, the AI imagining incorrect MRI scan results, as an idea, is quite worrying.

However, the fastMRI team says that this should not be considered as an issue with its method. To begin with, the input used for creating AI scans covers the entire target part of the body. The innovative model is not taking a wild guess at the final scan from pieces of a jigsaw puzzle; it has the necessary pieces but at a much lower resolution. Besides, scientists also created a new check system for neural networks that relies on the physics of the latest MRI scans. This translates to the fact that when a scan is created at regular intervals, the AI system also checks to ensure the output data is the same as the one MRI machine produces.

Sodickson says, “We don’t just allow the network to create any arbitrary image. We require that any image generated through the process must have been physically realizable as an MRI image. We’re limiting the search space, in a way, making sure that everything is consistent with MRI physics.”

Yakubova acknowledges that this very insight, which came after a long discussion between AI engineers and radiologists, enabled the success of this project.

The next crucial step is to get this technology into hospitals to help patients. The team of fastMRI is confident that this would happen rather quickly, maybe within a few years. The model and training data they created are open access. It is possible to incorporate the same into the existing MRI equipment without any additional hardware. According to Sodickson, researchers are in talks to manufacture MRI scanners.

Karin Shmueli, head of MRI Research Team, University College London, though not a part of the research, tells The Verge that this could be a key step of moving ahead. In her words, “The bottleneck is taking something from research into the clinic and is often adopted and implemented by manufacturers. AI is going to be more in use in the future.”

sepStream® offers the highest quality of imaging services using advanced and sophisticated equipment. We believe in using the latest algorithms for accurate results.