Sleep disorders are often undiagnosed among physicians, which includes radiologists. It is common for physicians to have sleep disorders that go undiagnosed, which might be contributing to their poor mental and physical health, silently.

According to new research conducted by the Boston sleep experts, which was released in JAMA Network Open, 90% of doctors tested positive for a sleep disorder. However, they remained untreated for the condition.

Ph.D. Matthew D. Weaver, the first author, with the eminent Sleep Matters Initiative at the Brigham and Women’s Hospital, along with his colleagues found that healthcare professionals affected with sleep-related problems faced an increasing probability of exhaustion and stress, which, in turn, would affect their careers.

Weaver along with his colleagues noted, “Sleep deficiency and disorder are very common. It is often one of the consequences of rotating shifts and extended hours of work, night calls, and challenging demands. Sleep disturbance should be considered a marker of depression, and lack of sleep could also contribute to burnout development.” 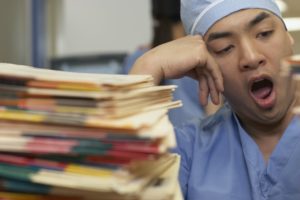 These factors further suggest that lack of sleep, or deficiency, could be one of the underlying contributing factors to mental health issues and poor stability in physicians.

To conduct this cross-sectional research, the research team created an exclusive Sleep Health and Wellness Program and provided it to the hospital departments through a 40-minute presentation. Physicians had to undergo a screening for a sleep disorder, while Weaver and colleagues assess the severity of their burnout as well as professional fulfillment with the help of validated methods of screening.

1,047 employees were a part of the screening program conducted from May 2018 to 2019. Approximately 29% returned with at least some type of sleep disorder, and insomnia was the topmost detected condition with 14% of employees reporting the same. More concerning was that 92% of the doctors with positive findings were undiagnosed as well as untreated.

Likewise, physicians who were screened positive for some type of sleep disorder were also associated with a closely four-fold increased chance of professional breakdown and were less than half as likely to be satisfied with their respective jobs.

Weaves and his colleagues further revealed that the previous research showed almost similar sleep health programs, which were effective. They even suggested hospitals try to treat these disorders to reduce burnout in physicians.

The authors of the study concluded, “This study recommends that undiagnosed sleep disorders, which remain untreated, are related to occupational burnout in healthcare providers. Future studies are necessary to evaluate the value of a dedicated sleep health and wellness program to reduce symptoms of burnout.”

To assess a condition and for correct diagnosis, sepStream® has the right solutions. Using the most advanced imaging software combined with the latest AI algorithm to deliver faultless imaging results.