Healthcare staff, which includes radiologists, are no longer happy with the mere congratulatory claps they received throughout this ongoing pandemic. What they want is a pay raise.

Even last month, workers of National Health Services in the United Kingdom made their way to the streets with the demand for a hike. Thousands of healthcare workers and others also marched during the protest to encourage the recognition of caregivers and healthcare staff. The unrest comes from the Treasury Department of the country, boosting payment of BHS doctors in July 2020, but not considering nurses and healthcare workers, according to Vice News reports.

The Vice News team spoke to a radiologist who worked during COVID-19. The radiologist said that the government is blatantly ignoring NHS staff like her.

The Vice was told, “We’ve come into contact with all COVID patients suspected or confirmed as they all get chest X-rays,” by an anonymous woman. She also added, “I think that’s been largely forgotten about in the media.”

Moreover, medical students expressed their second thoughts about the future, which includes potential pay. Several healthcare workers were fast-tracked so as to help them at the beginning of the pandemic back in March 2020. However, they were forced into meager side jobs to earn their daily bread, cover the expenses of their degree course, and make ends meet. 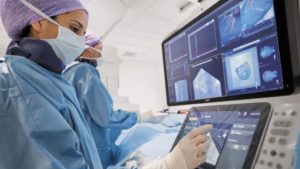 Going Back Into History

Since 2010, the United Kingdom’s healthcare workers have lost approximately one-fifth of their daily wages in real-life. In spite, of the fact that the Prime Minister of the UK, Boris Johnson, applauded the efforts of healthcare workers and requested the country to “clap for carers” during the peak of the COVID-19 pandemic, the announcement made by the Treasury in July 2020 for public sector healthcare workers only included a meek pay hike for doctors. Nothing was announced for the nurses or other related healthcare staffers.

Healthcare workers were working in the frontline through the pandemic. When they were refused a pay increase, it did not go unnoticed. A few months back, NHS workers marched to Downing Street with a demand for a pay rise. Over thousands of healthcare workers took part in more than 30 protests across the UK for proper recognition of workers in the healthcare department.

A nurse tells VICE News, “I’m having to work during my time off alongside working full-time in our local hospital because the pay isn’t enough. I’m overworked and underpaid, it’s hard to get on with it for some days but we do it for the patients.”

An average NHS nurse earns between £24,000 and £30,000. Their pay increased by £38 only in the last three years. In the UK, Campaign Group Nurses are calling for a 10% pay raise for healthcare workers and social workers after years of insufficient and below-inflation rises.

However, it is not only nurses wanting better and fairer pay. A Manchester-based radiologist who has worked during the COVID pandemic says that the Boris Johnson government has simply ignored the rights of NHS staff like herself. The nurse notes that small but significant slashing of assistance with costs for NHS workers. She said, “At the minute, I pay £30 per month to park the car.  We have to pay £180 every two years for a registration fee to work, even if they don’t give up a pay rise.”

Unite and other unions representing NHS workers helped organize protests. These organizations also spoke against the reluctance of the government to raise pay. The national officer of Unite for health, Jackie Williams, gave a statement saying, “In a decade of Tory austerity, NHS staff has seen their pay cut by 20 percent in real terms – and – no amount of Thursday evening clapping and warm ministerial works can compensate for this dramatic loss in income.”

For both radiologists and nurses –who asked to stay anonymous because of fear of aftermath at work – a pay rise would be a legit recognition of their hard work in this pandemic. According to Nursing Time reports, a sharp rise in the number of nursing staff considering quitting compared to the past year 2019, because of low salaries and no hike.

However, it is not limited to existing NHS workers who are concerned about their pay. Even student nurses, who ended their paid placements beforehand to work on the coronavirus wards, only to receive terminated contracts and face financial losses – are now feeling undervalued. A student nurse told the NICE News, “We were asked to provide support during the crisis but have received no extra funding or pay as promised. We’re now suddenly out of a job.”

Fast-tracked medical students, who were sent to work on the coronavirus frontline in March 2020, are also worried about their pay. A medical student from Leeds says, “From a medical student’s standpoint, there needs to be more help. You only get bursaries from a certain point while you’re training and it’s enough to live in. you end up having to take up extra work where you can to make ends meet. For those of us not coming from wealthy backgrounds, it’s tough.”

Without the NHS, there’s no survival strategy for the NHS at the best of times, and this is a difficult time for the world. Hence, the NHS has to take concrete action.

At sepStream®, we believe in delivering quality care and imaging results to patients and ensure that it helps healthcare workers to handle them carefully.