Brain health is integral to overall healthcare. There is no denying the fact that the brain is the one part of the body that remains responsible for the well-being of all other parts of the human body. If the brain fails to work optimally, the physiological activities get jeopardized as well. Hence, maintaining brain health is critical for ensuring health regardless of age. When it comes to diseases, Alzheimer’s disease is one of the most deadly ones as it does not get one bedridden but brain-ridden.

This disease impacts the functioning of the brain in many ways and mostly adversely. Scientists are not very sure about all the reasons for this disease. However, with the advancement in the field of radiology, brain scanning has helped researchers to figure out some of the mysteries associated with AD.  Plenty of reasons may be there behind the brain for functioning abysmally to cause AD. However, the clear MRI scans offer a better way of interpreting whatever is wrong with the brain and the factors that further influence its operations.

So far as the brain functionalities are concerned, the body remains ruled by the elements like iron, magnesium, calcium, sodium, etc., and each of these has a role to play in ensuring the well-being of the brain. Abnormalities in the level of any of these can lead to neurological troubles. Iron is one of the most important elements of the human body and remains responsible for managing plenty of regular physiological activities. However, a rise in the level of iron beyond the required limit can turn to be fatal at times. 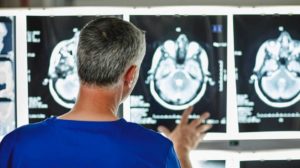 Recent studies regarding the impact of iron buildup in the brain of AD patients have revealed that excessive iron depositions can be detrimental to the brain’s cognitive capacity. The research conducted by the Medical University of Graz in Austria suggested that the baseline iron accumulation in the brain is lower in people without the memory disease than those with it.

The study further emphasized that the areas of the brain that deals with consciousness and language processing and abilities have been found to have a higher accumulation of iron in people with Alzheimer’s disease. The MD, chairman of the department of neurology at Graz, Reinhold Schmidt, further stated that traces of additional accumulation of iron were found in the deep gray matter, all of the neocortex areas, and to some extent in temporal and occipital lobes of the patients of the memory disorder.

According to him, these findings would redirect the application of drugs to make sure that level of iron in the brain does not get enhanced. Amyloid beta is the protein that shares a close relationship with the enhancement in the level of iron deposition in the outer level of the brain. Researchers have established that this protein inhibits the cellular functionalities in the brain, making it work less than optimally. However, owing to the restriction of imaging technology, the impact of this protein in the neocortex could not be comprehended accurately so far.

To get a better interpretation of the impact of iron buildup on the brain, Schmidt et al. developed a fresh 3T MRI technology along with post-processing to ensure that the images do not come up with distortions. A thorough experiment was then conducted to conclude that iron buildup directly relates to the level of cognitive decline. The more the iron elements accumulate on the outer layer of the human brain, the more the cognitive health of the brain deteriorates, aggravating the problem of Alzheimer’s disease. The study further confirmed that the level of iron keeps altering in the temporal lobe region of the brain of an Alzheimer’s disease patient.

Medical science has been trying to come up with a solution to halt the progression of Alzheimer’s disease for a long time to which the domain has failed to succeed. However, the least that could be done to at least arrest the growth of iron deposition in the outer layer of the brain would be to apply drugs that eliminate additional iron from the brain. Commonly known as chelators, these drugs can be a temporary solution for restricting the growth of the disease if not curing it. The domain of technology is advancing rapidly, and the medical sector is hopeful that in the future, there would be ways to cure or at least limit the progression of AD more tractably.

If you are looking for an imaging solution, sepStream®  can be your one-stop solution at any point in time. With its variety of packages and prices for different services, you will find reliable solutions at reasonable rates here. Advanced technology-based tools and techniques, along with timely delivery, are what make them the best in the market.