Walmart Enters Into The Imaging And Health Industry With New Clinics

The rise of Wal-Mart has been meteoric. When it first started in 1962, Wal-Mart had a single store under its sign located in Rogers. However, it soon became so popular that in a span of only twenty years, it expanded to all the states in America. Over the years, Wal-Mart prospered so much in its business that it has begun to develop in other countries as well.

What once was only a departmental store catering to the general needs of the public has diversified so much that you can find Wal-Mart catering to the needs of more than half of the American population today. In its recent years, Wal-Mart has also begun to show interest in the healthcare field, owing to the huge potential that this area has.

If you are wondering what has led to the meteoric rise of Wal-Mart- the reason is pretty simple. They offer the best products and services at the best prices. With its expansions into these new areas, many customers and market analysts are now wondering whether Wal-Mart will deliver the same quality and affordability that has become its hallmark. 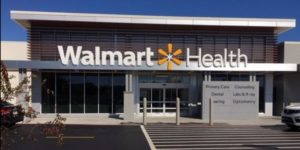 Wal-Mart has expanded its footprint in the health care industry with two new clinics that have been inaugurated in recent times. One of these clinics is also a landmark achievement in the sense that it is the first one in the Arkansas area.

Known as the Wal-Mart Health Elm Spring, this healthcare center located in Springdale is being advertised by the retail giant as a completely new prototype. It is much smaller in size and magnitude than the other centers that had been previously inaugurated by the company. The reason is pretty apparent. It has only begun on a test scale to try out the new layout and services that the company has in mind.

The second location for this new expansion is Loganville, Georgia. It is not much different from the other freestanding locations that have already been in use in several locations across America. The center attends to urgent cases and offers primary treatment. Facilities such as X-ray, pathological labs, dental care, optical care, hearing aid services, counseling, and diagnostics are also available.

Now let’s come to the point that has been attracting the attention of the maximum number of people- the pricing of services. As reported by the Business Insider, the average price of the services is about 30-50% lower than the typical expenses that the customers have usually been paying for the same quality.

The Supercenter that had started in Calhoun a while ago provides annual check-up for a child at about $20. The lab testing services start at as less as $10. A center in Dallas, Georgia, has also been operating successfully for some time now.

The challenges to health care facility brought in by the Covid-19 pandemic have been unthought-of.

With such a large volume of patients in need of medical attention at the same time, maintaining the quality of service has become the greatest challenge of the healthcare sector.

In light of this situation, the Wal-Mart VP of Health and Wellness has stated that maintaining the quality of service without compromising on affordability will remain their priority. The team at Wal-Mart has also admitted to the fact that the pandemic situation has also helped them to understand the vulnerabilities of the health-care system.

Reportedly with many of its employees who have fallen prey to the new virus or are locked up due to restrictions in their area, the company has been facing a record shortage of staff. With so few people on the team and such a large number of families in need of service, bridging the gap has required meticulous planning and immense hard work.

From the experience that they have gained so far, Wal-Mart is now planning to roll out tailored health care resources and launch some educational programs to cater to the unique challenges of the area in which they operate.

So far, their quite successful and is being well-liked by the clients. With the company planning to expand further with some new centers, it is clear that the others are doing good business. New avenues are also being explored, such as virtual consultation and the like. By acquiring the tech platform CareZone, now you can avail the Wal-Mart healthcare through your mobile phones as well. More than 5 million downloads have already taken place. In conclusion, it may be said that Wal-Mart has a promising prospect in the healthcare industry.

For the latest and best technology and knowledge in the field of radiology,  sepStream® is the address for you. With their commitment to providing quality tools and technology at the most affordable prices, they have risen as the number one choice of customers. Head to their website today to know more.